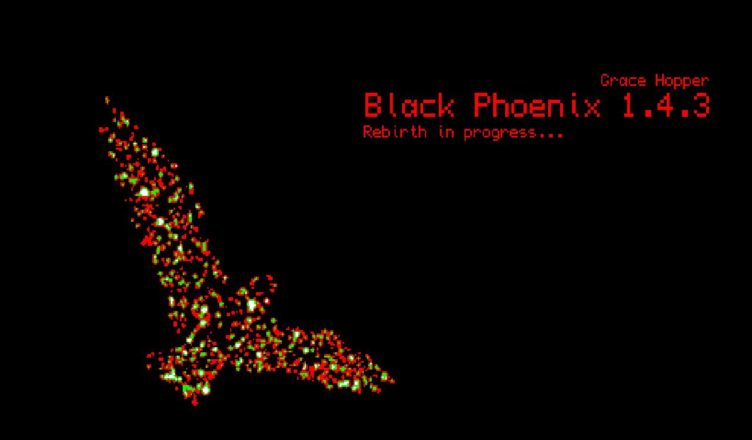 Hi everybody,
the new version of Black Phoenix has just been released. Let’s see what’s new.
The first innovation appears at startup: we don’t have any more the long message sequence describing the loading of extensions; instead we see a simple animation showing a flying phoenix bringing us directly to the desktop loading.
Here is the second innovation: until the previous version, at first startup you were asked which language to install, while version 1.4.3 has a dynamic self-configuration so automatically updates its menus.
Once the boot is performed let’s take a look to the desktop.
Two things are immediately perceived: the presence of the new wiQget version, with its half-transparent layouts, and the extended theme Frog at the place of the standard red and black theme. This one is anyway present in the system: you have only to utilize “extended themes management” to set your favorite theme.
Looking at the upper left angle we notice that Qascade has no more the “Start” item, that was too Windows-like, but a more neutral “Menu”.
Inside the menus the most important differences are the replacement of the name “Accessories” with “Tools” (for the reasons just explained above) and the separation of “System management” into two different terms: “System configuration” in which are grouped all the settings and “System management” which contains all the tools to administer the events.
In “System configuration” we can find a new term: “Black Phoenix settings”, which starts Qustomizer, that is the main feature of this new version.
Qustomizer allows to configurate each characteristic of your system no more by manual editing of the BOOT file, but through a very user friendly graphical interface. A detailed article about the operation of this new program will come soon.
For what it regards the new programs, we can find above all the version 1.2 of the photo-retouch application QTImage, and QWIRC by Per J. Witte for .win files management. SUQCESS and BMP have been updated to the last available release.

Here also is a little originality, since the codenames of the first versions, even if having precise connections, were not interrelated.
Version 1.4.3 dedicates its codename to Grace Hopper, and from now all the next versions will have a name of a female personality which had an importance in informatics history. In this way we want not only to esteem all women, but also honor the memory of all those women that had a crucial role in a universe – the informatics one – dominated by males, and that have been often unfairly forgotten.

Grace Murray Hopper had been one of the programming pioneers. Most of her work contributed to create informatics as we know it today.
Born in 1906, a doctorate of mathematics research at Yale in 1934, enrolled in the U.S. Navy as reserve in 1943 and discharged in 1986 as Admiral, Grace Hopper dedicated his whole life to research and programming. She was the author of the first experimental compiler, so… think to her the next time you launch Q_Liberator 🙂
She was one of the authors of COBOL language.
A curiosity: we owe to her the use of the term “bug” to indicate a coding error.