The most important news concerning the latest version of Black Phoenix (1.4.3 – Codename Grace Hopper) is surely Qustomizer. It is the new control panel of the made in Italy QL distro.

But what exactly is it and how does it work this program? Qustomizer is a control panel which allows to set up your QL, real or virtual this doesn’t matter. But let’s make a little step back. Until 1.3.2 version, Black Phoenix showed in its menu the main function “System Managment”.

Through this function, it was possibile to access to the different setting tools. With 1.4.3 version, this voice has been separated into two different functions: “System setup ” and “System Managment”.

The purpose of the first function is to interact with all those aspects of Black Phoenix which remain permanent, for example the chosen theme, Qascade menu voices or the configuration locks.

The second concerns instead all the temporary QL managment issues, such as for example the jobs priority, the recent files list or the removal of executed jobs.

The aim of this separation is to maintain as ordered and consistent as possibile a Black Phoenix section which showed always more voices. Inside “System setup”, at the voice “Black Phoenix settings”, we find the Qustomizer program.

Qustomizer is the interactive substitute of the old BOOT file; through it we can change a lot of aspects of our system, without needing to editing the BOOT file. For example, we can decide what extensions to add, which hotkeys to define, the way of moving the windows and much more. In this way we can interact with our QL System without being forced to programming it. 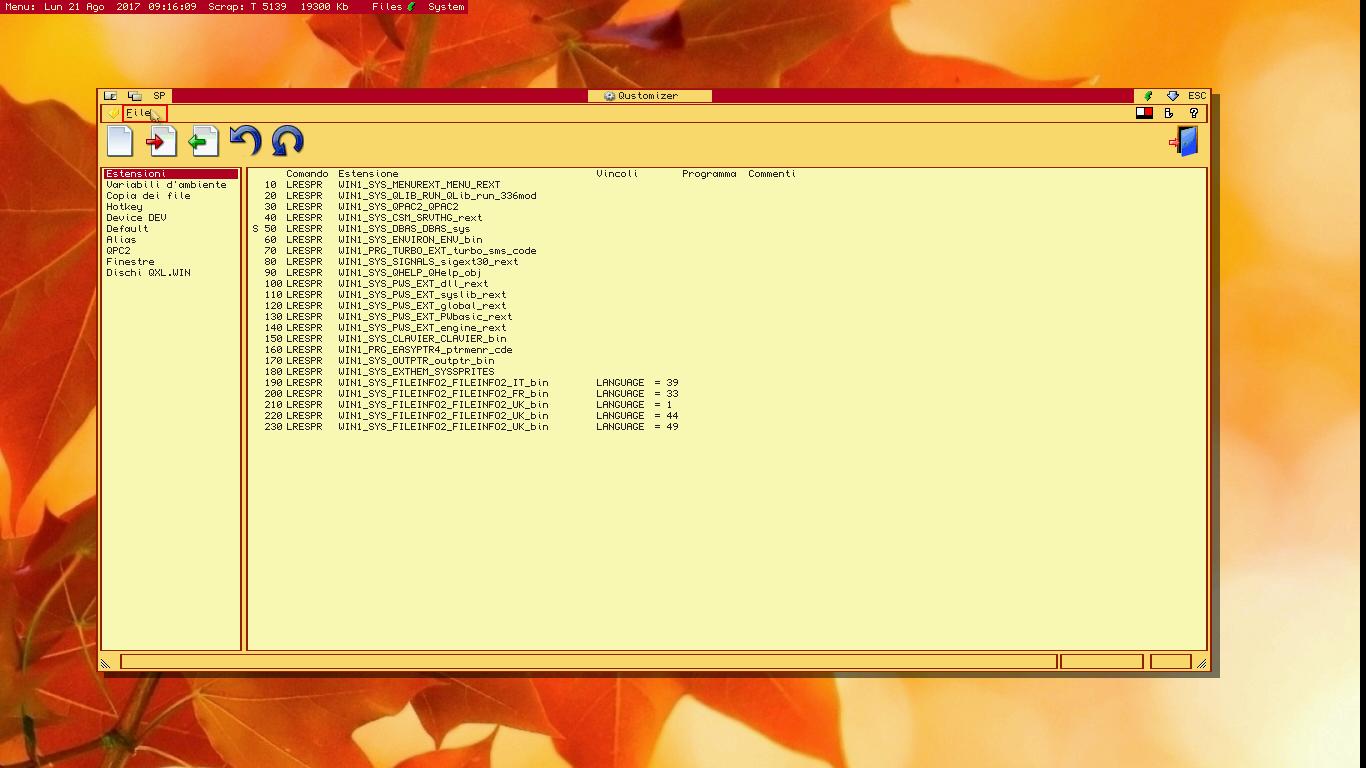 Black Phoenix shows itself as an evoluted graphic interface, very similar to QTImage. Both indeed have been developed through Skeleton, the program builder by Quantum Technology. On the left side we find a list of voices which represent the different categories: extensions, environment variables, hotkeys, win disk managment and so on. In the right part we find the detail lines of each category. So we find the list of the loaded extensions, of the defined variables, and all what we had to manually type in the boot file before. The extensions are ordered by a progressive numeration, which represents the order of execution. Furthermore, it is possible to stop the execution of one or more lines without erasing it permanently: it will be simply shown with an “S” attached before.

We can obviously change or delete any voice or insert some new. The insertion will happen in two times: first is created an empty line which will be edited by the user in a second moment. But the real powerful feature of Qustomizer are the execution constraints. This means that i can decide under which conditions that line can be executed. For example, we can activate a certain hotkey only if the screen resolution is of a certain kind, or i can define which Qascade menu to launch depending on the the system language.

And if i make some mistakes?

No problem: Qustomizer shows two “undo” functions. The first restores the initial sessions’ values; the second, more radical, restores Black Phoenix’s original’s settings.
Furthermore, is possible to import and export settings file so to create multiple versions or to load the settings between a system and the other.
As last thing, for every comment line are available two fields in which i can insert the referring program and personal notes in which i can describe what is the use of that specific line. 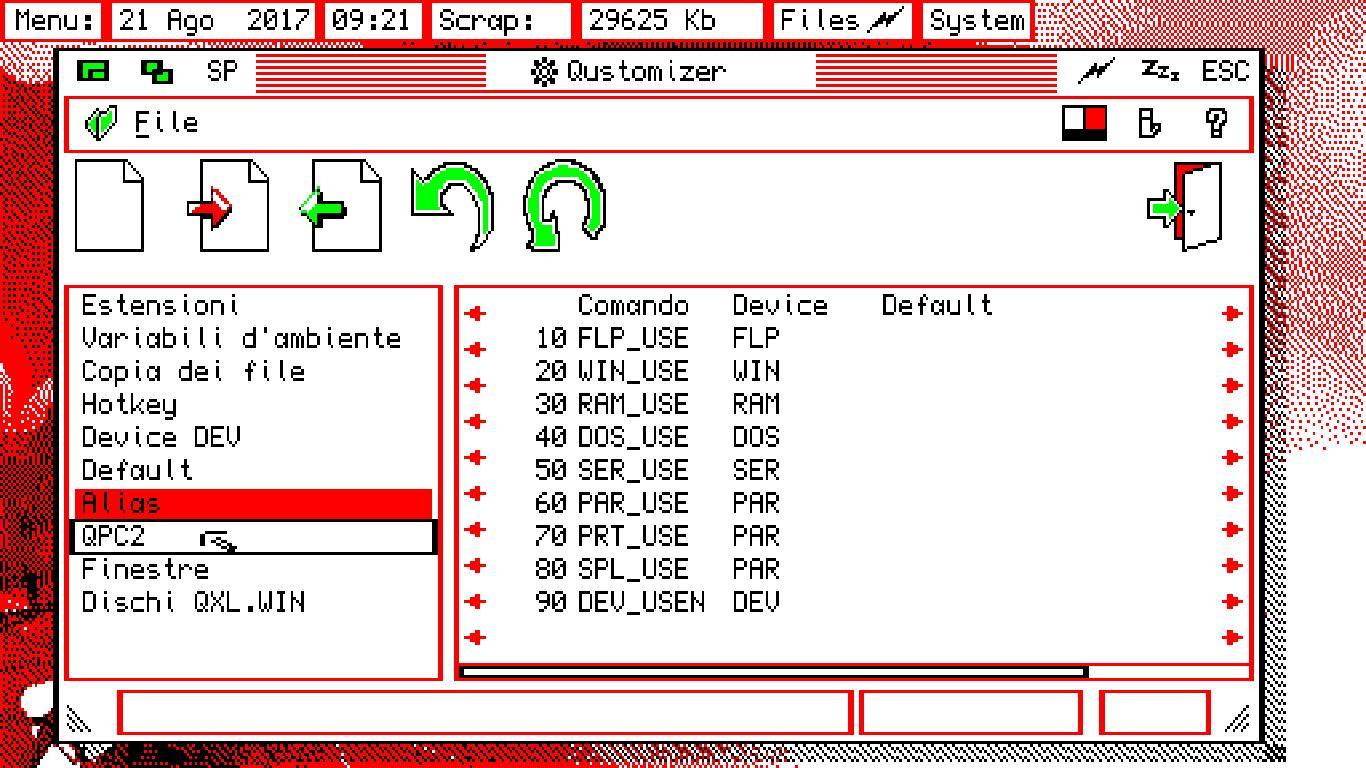 But where in the world is BOOT?

Don’t worry: it is always there and is still making its excellent job. Obviously, to get this kind of setting operative, we had to completely redefine the BOOT process. This has been divided into three parts. The first part is contained into the WIN1 BOOT file. It’s a sort of empy container in which is possible to load any  peripheral driver of the real QL (SuperHermes or similar). Therefore in 90% of the cases there is no need to change it. From BOOT is launched Blackphoenix_bas, whose purpose is to load all BLACK PHOENIX settings. This part must never be modified. From this program is launched the third phase, called Desktop_bas. In this phase the user loads all his preferences and customizations.

Periodically new Black Phoenix versions are released. In order to avoid continuous system customizatios,  it’s possible to insert a second file called WIN2_DESKTOP_bas in which insert all of our changes. The system will automatically recognise its presence and will execute it instead of the standard one.

Then it’s enough to copy “WIN1_SYS_DESKTOP_DESKTOP_bas” in “WIN2_DESKTOP_bas” and modify this last according to our needs. In this way the preferences well be maintained also in the next versions.

One thought on “Qustomizer, the new Black Phoenix control panel”